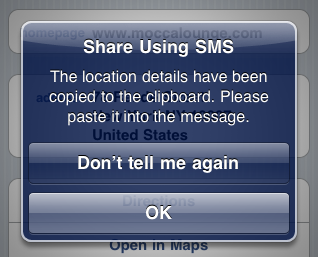 Our last Where To? update was the first update to go through Apple’s automated private API usage detector Craig Hockenberry noticed recently. No wonder, this tool found one match we introduced four updates ago and falsely didn’t consider as a problem. The method is named setNumberOfRows: and allows placing two buttons in an alert below each other instead of beside each other.

What was interesting though: Apple didn’t reject the update but just asked to resolve the issue at the next update. To me that’s a new spin to the whole App Store review debate and I must admit that I like the approach. Still, it’s debatable why such a useful functionality to create alert buttons with slightly longer labels is a private API. But leaving that aside I value Apple’s approach to solve those kind of minor issues in a low-key manner that doesn’t lead to silly resubmissions and loosing valuable time.

After all, it’s in Apple’s best interest to avoid burdening the review team the loads of resubmissions by giving the developer the time to fix the issue at the next update.