After our launch of Where To? 10 which includes an iMessage app, I was fascinated how it would perform in the new iMessage App Store. Similar to the Apple Watch App Store, Apple chose to build a new, separate App Store for iMessage apps.

The US store differs from other stores in that it has categories (similar to the iOS App Store but with fewer categories) and Top Charts. I didn’t check many other countries but it looks like the US is unique in this regard.

Update Sept 16: Top charts and categories seem to roll out worldwide. At least in Germany and Italy, they’re now available, albeit with fewer categories.

Top Charts are interesting because they offer an insight how the market works and which categories and business models are most successful.

I went through the list of 150 apps in both the Top Free and Top Revenue charts and made an analysis on the type of content and the business models used. Some items were hard to categorize because there are apps that are essentially just sticker packs. Or there are iOS games that have a sticker pack attached. I tried to categorize them according to their actual content. 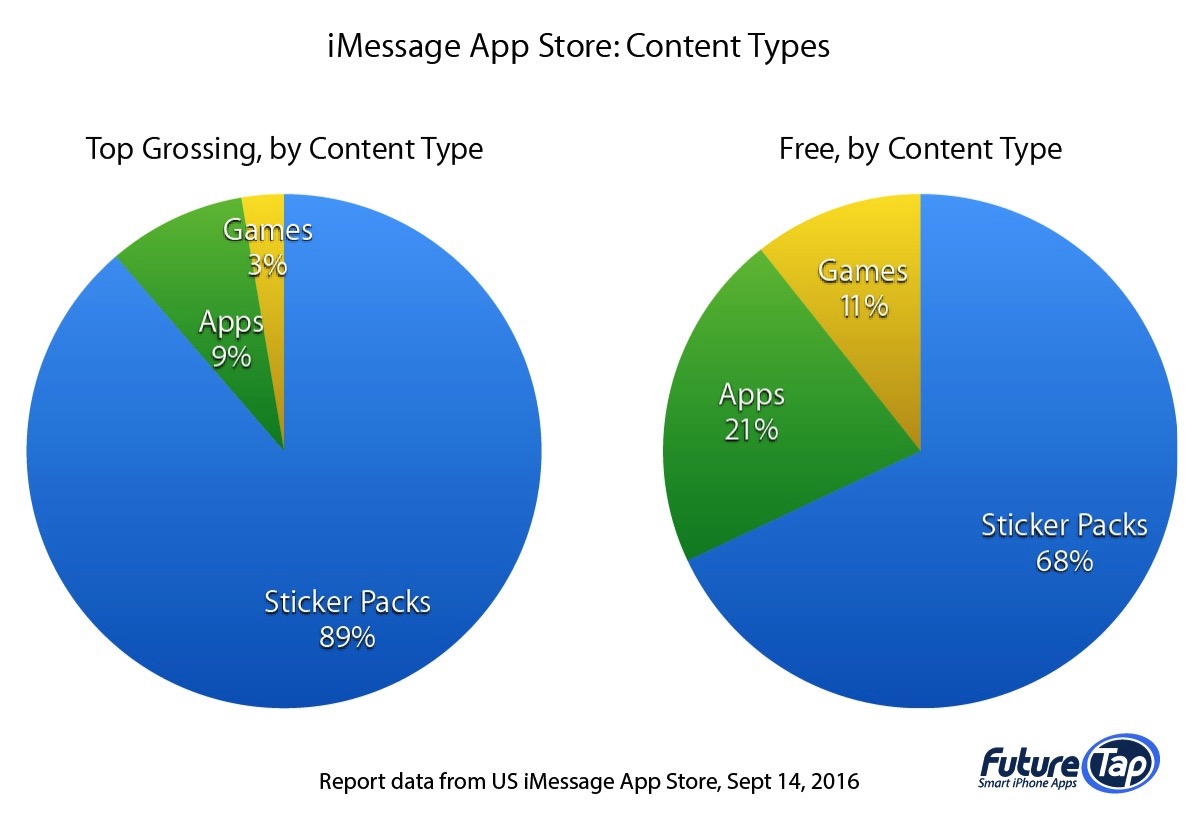 First, sticker packs drastically outnumber apps and games. The revenue share generated by sticker packs is even higher than the free download share of sticker packs. So clearly, users have no problem whatsoever to open their purse for well-designed pixels.

The relatively small number of games was surprising to me. Apparently, only a small percentage of games benefits from iMessage integration, specifically turn-based games.

The distribution of business models is even more interesting. In contrast to the iOS App Store where freemium titles dominate the top-grossing charts, the overwhelming revenue in the iMessage App Store comes from paid titles. This reminds me of the early days of the App Store where In App Purchase wasn’t even available.

Probably the #1 reason for this is the lack of IAP in no-code sticker packs. These sticker packs consist only of the actual artwork and are easy to create for designers who don’t want to code.

Nevertheless, even the three of four games in the grossing charts are traditionally paid and 9 of the 12 apps.

Another observation I made: the sales and the ranking of iOS apps including an iMessage app seem to be independent in both stores. For instance, at the time of writing these lines, Where To? ranked #73 in the (overall) US iMessage Top Revenue charts but didn’t rank at all in the US iOS App Store, even on the category level.

We’re only at day one of the iMessage App Store so it’s hard to predict what the future will hold but I expect (and kind of hope, as an app developer) the number of apps and games in the top charts to increase. Stickers are new and fresh and everyone wants to try them but after the initial excitement levels down and after users have already filled one screen with sticker packs, users will probably gravitate towards deeper apps and games that promise longer lasting benefit. Another reason for this is development time. Developers only had three months of time since Apple introduced the first beta of iOS 10 at WWDC16 – actually less because of bugs in early betas. Developing a great app or game takes time so we’ll definitely see more non-sticker titles in the future.

I also believe the ratio of freemium titles will increase vs. paid-upfront titles, even for sticker packs. It’s not hard to see that there will be tools to automatically generate sticker pack apps with only a few free stickers and the rest of them locked behind an IAP wall. As soon as designers have the (easy) choice, they’ll make use of it.

Overall, it’s fascinating to follow the launch of this new economy with its own new laws of physics and I’m really curious to watch this fourth baby (after the iOS, Mac and Apple Watch App Stores) grow over time. For us, it’s an exciting business opportunity and I’m glad we’re part of it since day 0!