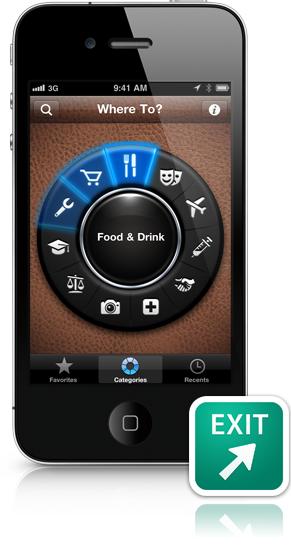 The new version 3.0 of Where To? has been approved and is now available for download in the App Store. It’s free if you’re currently using the 2.x version and $2.99 (or your local equivalent) otherwise. Some of the new features are only available on iPhone 4, some require iOS 4. But we haven’t forgotten our iPhone classic users, so there’s something new for all of you.

Most of our users love the wheel-style home screen. Some of them criticized though that the tactile leather look wasn’t continued throughout the app. Well… we listened! Where To? 3.0 comes with a new integrated leather look that’s continued throughout the whole app. By the way: One little eye candy—I leave it up to you to find it—is based on a similar feature in NetNewsWire for iPad. My thanks go to Brent Simmons for his kind permission to “steal” the idea.

We love the new display of iPhone 4. From day one after the announcement at WWDC we knew we had to support the new resolution. After a few night shifts, Wolfgang, our Designer, finished the task to create hi-res versions of more than 170 images included in the app and we couldn’t be more pleased with the result.

This feature requires iOS 4 and one of the newer devices (iPhone 3GS, iPhone 4 or iPod touch 3rd generation) and is very handy for instance if you’re searching for a restaurant and wanna call to make a reservation. After the call you can get back to the exact same screen in Where To? — super quickly. Of course, it’s also handy if you quickly wanna check something in another app. You can use the new app switcher (double click on Home button) or the traditional home screens to switch between apps.

Instead of a boring plaintext mail Where To? now creates beautifully crafted HTML mails with an image of the location and links to the website and map.

If you’ve installed iOS 4 (on iPhone 3G or newer), you can share locations via SMS now without leaving the app. The cumbersome launching of the Messages app is not needed anymore.

Feature-wise, there’s a lot more to come over the course of the next months. We just didn’t want to cram everything into Where To? 3.0 to make sure, you guys don’t have to wait any longer to make use of the new features. Christian, one of our developers, is hard at work finishing an upcoming feature that’ll definitely put Where To? on a new level. We can’t reveal any specifics yet, so to be in the know first, subscribe to this blog or follow us on Twitter.

And if you like Where To?, please help us out and write a short review on the App Store. Or check our Facebook page and “Like” it.

Update: Make sure to download Where To? 3.0.1 that fixes a crash under iOS 3.x and some other minor issues.