We’ve been pretty busy the last months working on the next update of Where To? and I’m extremely delighted to introduce it to you today. The single feature we worked on so long is called Where To? 3D and it’s Augmented Reality as you’ve never seen it before. It works on iPhone 4 and 3GS running iOS 4.0 or later.

If you can’t wait, download the Where To? 3.5 update from the App Store and activate Where To? 3D by tapping the new eye-icon in the bottom toolbar. Where To? 3D is available via In App Purchase for $0.99 or your local currency equivalent. The purchase is valid for all your current and future devices under your iTunes account. A 30-day Trial mode lets you explore the new feature at no charge. Also check out the video with Kira on shopping tour in Munich with Where To? 3D.

If you’re interested in some background information, please continue reading to get the inside scoop on Where To? 3D’s creation and design ideas.

When we planned the feature, we looked at AR implementations currently available on the market. In our eyes, these implementations were all suffering from serious usability problems. So we said to ourselves: Let’s work on those issues and try to invent something new. What issues — or as I prefer: challenges – am I talking about?

Everyone who had the joy to use an old-fashioned magnetic compass, probably made the experience that compasses are not very exact at times and more notably take some time until they converge on a direction. The same holds true for the iPhone’s integrated compass. This results in an operation where the displayed results lag behind the reality when turning the device in different directions.

Our solution: Making use of the gyroscope to achieve a much smoother and more responsive display. Unfortunately, the gyroscope is only available on iPhone 4. If you’re on a 3GS you’ll have to accept the small lag caused by the built-in compass. 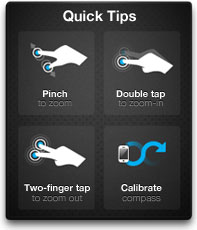 Usability challenge #2: far and near POIs

Depending on where you are (in a big city or in a rural area) and what you’re searching for, the results are in a very different distance. First of all, the distance is an important piece of information, so making all results the same size isn’t a good solution.

Our solution: First, results are displayed in a real 3D world and their size and stacking order depends on the distance. Then, you can zoom in and out using the gestures already known from the map: Double-tap to zoom in, two-finger-tap to zoom out, pinch for fine grained zooming. Zooming of course affects the camera picture as well.

Usability challenge #3: results covering each other

This is a tricky one. In real life, in many cases results are nearby. They’re all in the center of the city, a mall or something similar. This results in their labels being at the same position and covering each other. Some implementations solve this by stacking the results vertically, forcing the user to look high into the sky to see what he wants.

Our solution: Where To? 3D explode™ 😉 — when you tap on any result covering another, they will be exploded in a way that allows to easily select the result you’re after. This works beautifully with 10, even 20 results next to each other. Tip: By tapping and holding, you can explode and select a point of interest in one easy procedure.

Our solution: Either orientation is OK, the view automatically adapts. We’re automatically sliding away the top and bottom bars when you go landscape, so you’ll get an unlimited field of view to the sides. Finally, the displayed grid creates visual context and helps comparing distances. 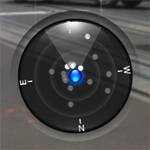 These are just a a few of the many challenges we faced, and how we solved them. There are countless minor details such as the little radar displaying the currently shown points and the field of vision. I almost forgot the biggest challenge: How to achieve great performance and a maximum responsiveness? We spent considerable time optimizing the code and getting the most out of the hardware.

Overall, I think we might be a bit late to the AR game but we feel, the development effort was worthwhile and the results speak for themselves. 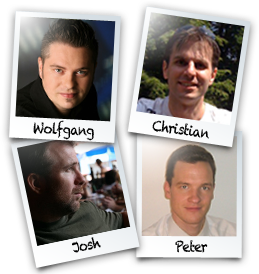 The team behind Where To? 3D comprises some new faces I’d like to introduce you shortly. First, Christian Lier developed most of the Where To? 3D code, especially the low-level OpenGL stuff. Then there’s Peter Breitling of plaincode who wrote the (surprisingly complex) code to combine the compass and gyro signals and agreed to let us use it in Where To? 3D. And finally, Josh Mobley created the subtle sound effects, particularly the intro sonar loop.

Already an “oldtimer” in our team is Wolfgang Bartelme who significantly influenced the Where To? look & feel since the very beginning in 2008 with his magic photoshopping hands.

I’m more than happy with the result we’ve achieved together and I’m really looking forward to working with this awesome team on even more great stuff for Where To? and a new app that’s coming down the pipe.

If you haven’t done yet, please download Where To? 3.5 on the App Store. As always, the update is free for all Where To? customers since 2.x. If you haven’t checked it out yet, we hope you’ll join the more than 300,000 users who already purchased the app.

I hope you’ll love the new Where To? 3D as much as we are. Be sure to let us know your feedback in the comments.